I did it! I conjugated a Latin verb from memory! That's not surprising because I taught Latin for ten years before moving into technology. But I still get a little tingle in my brain when I do it because I am composing it anew.

What was more challenging was making the table you see above in HTML. I composed it all out of my memory without the use of a web editing tool using plain HTML, which lies jumbled in with SQL, Basic, ASP, Scratch and PHP. Just like my Latin, it fades but never goes away. Here's what I really wrote: 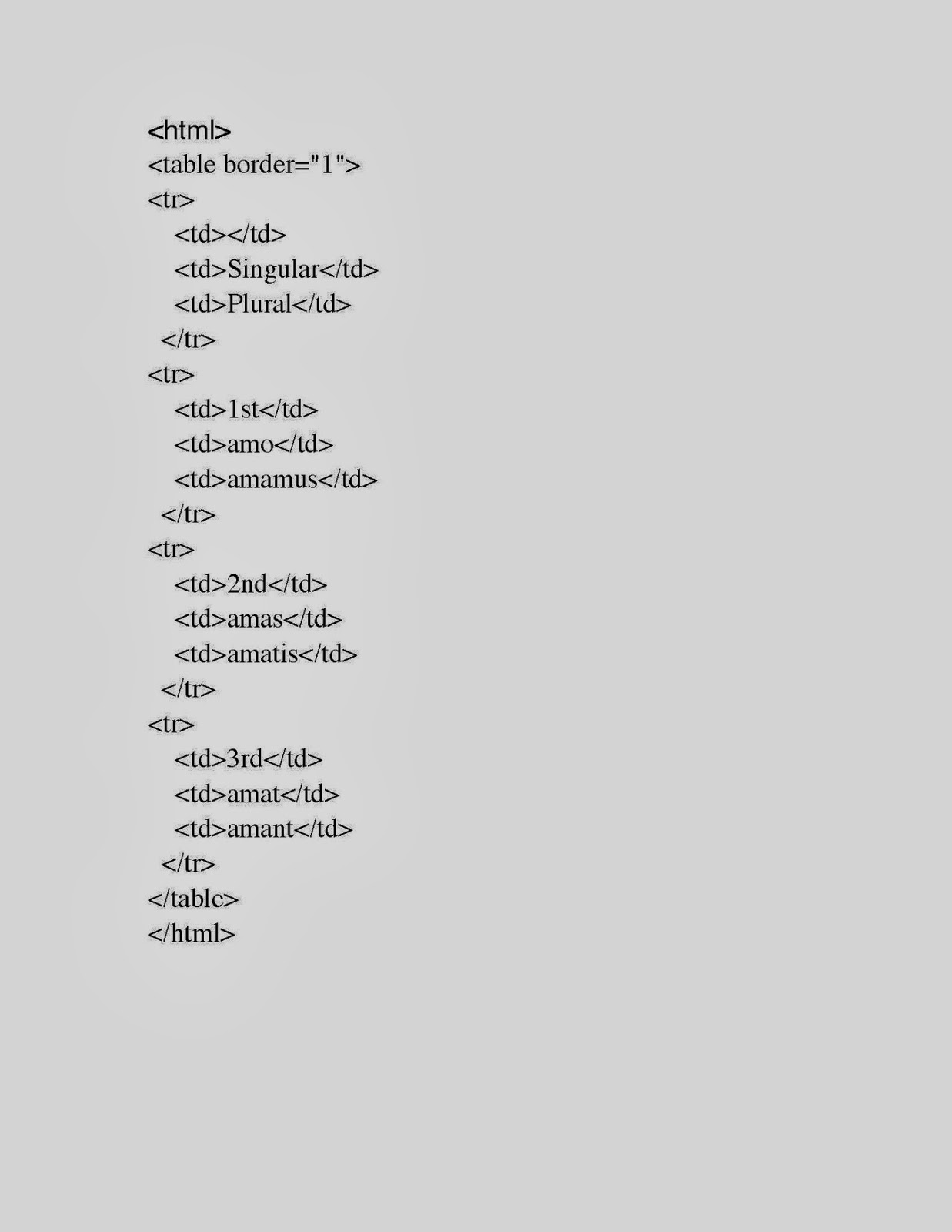 Classic HTML, readable in any browser including Netscape 1. See how different it looks from the finished product? Many coders consider HTML a "mark-up" language, not a true computer language. Even so, the mind must twist itself into knots to compose HTML in the beginning, then later it becomes second nature. Just like Latin.

When I began teaching at The Episcopal Academy in 1990, 7th and 8th graders were scheduled into beginning coding classes where they learned LOGO on Apple IIe's. BASIC was offered as an elective in high school, and a few students continued on to AP Computer Science. Latin was required in 7th and 8th grades.

In the mid to late 1990's, until the tech bubble burst around 2000, students were storming the gates to learn code. It was largely a vocational choice. That's where the money was. Many got burned; the tech sector got a bad reputation and fell out of favor. And Latin was required in 7th and 8th grades.

In 2014, our students are coding around the edges of the curriculum in grades K-12. We have a high school robotics team and a middle school robotics club. A handful of kids take the programming course, now offered in Java, and some go on to AP Computer Science. Very few of our students become professional programmers. Latin is still required in 7th and 8th grades.

The classical liberal arts education claims to transcend vocational trends and to develop minds with timeless skills, flexibility and resilience. Learn how to learn and the world is your oyster. Is this notion a vestige of Western imperialist culture? a form of management training? deeply held cultural heritage? magical thinking, or just the only thing we can come up with to teach to kids?

Hard to say. But that's the way we keep doing it. Along the way we tip our hats to vocational trends. Schools have added Mandarin in the past few years, replacing Russian, which was very much in vogue in the '70s and '80s until the Berlin wall fell. Japanese language and business practices enjoyed a spike in popularity and then sank into obscurity along with Japanese business prospects. When the Chinese economy crashes, we will move on to the next power language. (It's looking like Russian again.)

Ironically, when schools try to follow the latest trend in order to make their students more prepared for work, they inevitably prepare them for today's job market, which we know will not exist when they graduate from college. I have a job that didn't exist when I was in school, and I expect my sons to have careers that would be unrecognizable to me now.

The best preparation for the next economy, now more than ever, will be a classical liberal arts education. In attempting to future-proof the curriculum, schools may be imparting skills that will be obsolete soon. Even coding skills are not immune to the vagaries of the job market.

But now it is time to add code to the classical liberal arts education. People have learned geometry and algebra for thousands of years; calculus joined the math group recently. While code is a relative newcomer, logic, the matrix that spawns programming languages, permeates all aspects of the curriculum while it also differentiates itself from them in this uniquely pure and intellectually demanding form.

More than the classical disciplines, code is everywhere to be learned. You can learn it from a fat book ordered from Amazon; you can pay for an account on LYNDA.com; for free you can go to code.org, codeacademy.com, khanacademy.org, Kodable.com or stackexchange.com. Every coding curriculum you could possibly imagine for a k-12 education already exists and is in use somewhere. If we could measure the amount of computer science that is being studied in the world, it would probably dwarf efforts spent in any other discipline in schools. The world of K-12 education is ignoring a sleeping giant.

As someone who has spent years reading and teaching Latin and Greek, I am skeptical bordering on contemptuous of introducing utilitarian subjects into the curriculum. The sudden adoption of Mandarin, a very interesting language and culture in its own right, is purely mercenary in the current economic context, but it won't harm anyone to learn it.

Computer science is different. It has ridden several waves of approval and rejection in the culture. The study of English Literature kept pounding at the ivory doors of the academy for generations until, relatively recently, it took its place alongside Classics. Educational pundits have cried out that no child be left behind by the computer science juggernaut, but many people continue to become cultured, richly educated citizens without much digital literacy.

I am a self-taught programmer. There was a need in the school where I worked and I filled it. I built a small database application and it grew and grew. I learned whatever I needed to learn. I copied other people's work. I googled solutions. In the haze of raising a young family, I lulled myself to sleep thinking in code. At first it was a utilitarian decision, but then the stark beauty of algorithmic thinking began to vie with the beauty of Ancient Greek poetry in my heart. The minds of the past - the recent past - those who invented SQL and the other tools I used - they joined the company of authors, musicians, mathematicians, scientists, writers, actors and philosophers who were dear to me.

Computer science isn't the next big thing. It isn't a necessary thing. It might prepare you for the workforce or it might not. It isn't a fad. It has taken its place in the pantheon of the arts and sciences. It is a discipline. It is a classic. It can be tedious, boring and frustrating to learn. It can also be exhilarating to see a piece of code execute perfectly after you have banged your head against a problem for hours.

Kindergartners should write code as they are learning to read English, and teenagers should be griping about their code homework. And all our students should secretly love it, even when its boring or frustrating, because it gives them that tingly feeling.

When I entered college in 1978, Computer Science sat side by side with Classics in the table of contents of Harvard's notoriously ponderous course guide and it continues to thrive in colleges and universities. It is time to see it throughout the curriculum along with language arts and mathematics.

If you have never coded before and you are reading this on a computer, type the HTML above into a simple text editor (Notepad for Windows, textedit for Mac) and save it as "test.html". Then double-click it. You should see the table that you see above. If you don't, you may feel the urge to debug the problem. For this we now have google, the god of answers.

Whether your code works or not, you will feel it: that tingle in your brain as you compose. Frustrated because it didn't work? That's good for your brain too. Failure is a mighty teacher. Keep at it. Don't stop. Give in to the feeling. It is what your brain needs and craves. You are composing code, joining the minds of millions of coders in a rich cultural heritage.